A new research out of Taiwan suggests that if you do a moderate 20 minute exercise session it can improve cognitive performance.

The cognitive ability task that was conducted in this research is what’s known as a Stroop test. In it, words representing colors are presented, and the test taker is required to say what color the word is printed in, regardless of what color the word represents. For example, if the word “yellow” is presented in green ink, the correct answer is “green.” The Stroop effect describes the phenomenon in which it takes longer or is harder to give the right answer when the word is printed in a different color than the color it names (as in the example above) than when the word and the color it’s printed in are the same (for example, if “yellow” was printed in yellow ink).

When the participants did the Stroop test after their 20 minute ride, they scored significantly better than when they’d taken it without working out first. The 10 minute and 45 minute workouts, however, had negligible effect on their test performance, as measured by accuracy and speed of response.

The workouts in this study were done on a bike and were performed at a moderate intensity (approximately 65% heart rate reserve). Although this test was performed on a bike, you could also go for a moderate run or row if you didn’t have access to a bike. 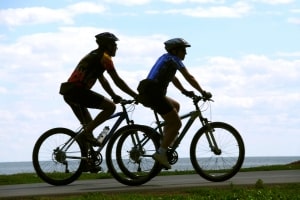 Try the test yourself!

Want to see if the study’s finding applies to you? We have put the Stroop test below, so go through the test then go and enjoy a moderate 20-minute ride, run or row and then try the test again.

The researchers speculated that a 10-minute workout doesn’t produce the short-term brain changes of a 20-minute workout, while, for the participants in this study, and that a 45-minute workout was too long and hard to negate the benefits. It’s likely that someone who is fitter than the average healthy male that took the test would see a cognitive boost from a longer workout, but cautioned, “It should be noted that after prolonged exercise (i.e., two hours), even participants with high fitness would be expected to experience decreases in cognitive performance, possibly due to central fatigue associated with heat stress, dehydration or hypoglycemia or to negative effects on information processing.”

You can view the abstract of the research below:

If you have think you have no time to exercise, be honest with yourself and make time. At Moonee Valley Health and Fitness we believe there is always time for exercise, and in case you don’t have 50 minutes to spare for our standard personal training our our boot camp sessions then why not try our 30 minute personal training options.

Call (03)9996-0790 send and online equiry or come on in and visit our Personal Training Studio in Ascot Vale.

About the Author: Moonee Valley Health and Fitness